First of all, please introduce yourself

I am Gabriela Mendez, Venezuelan; but that’s a bit too formal, I’d rather be Gab most of the time. Thanks to socialism, I had to leave my family in 2016, and change the Caribbean for the Mediterranean. A year ago, I decided to start acting again and Malta has been very kind, I’ve been fortunate to work with remarkable directors and mentors since then. 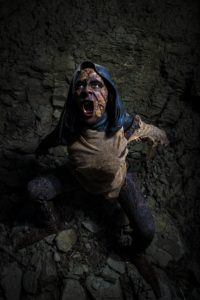 Caliban has a grotesque exterior, and unfortunately, its ignorance is just as noticeable. Where there is ignorance, there is a lack of knowledge, and I can’t blame Caliban for that.

“Slavery is the daughter of darkness; an ignorant people is the blind instrument of its own destruction. They mistake pure illusion for reality, license for freedom, treason for patriotism, vengeance for justice,” said Simón Bolívar. He wasn’t right about many things, but about this, he was.

Caliban, unknowingly, makes a mistake that sentences it to live under a rock at the mercy of Prospera (Prospero)’s illusions, feeling inferior and dependent on a master. It is left wishing and strongly believing that the next visitor to the island will become its new master and saviour from the tyrant.

I have a soft spot for playing minorities, and this one hits close to home.

Stephen is pushing me to explore Caliban’s weirdness in every rehearsal and it’s unbelievable how much I enjoy the challenge of personifying that creature.

In this version of the play, the characters of Prospero (Prospera), Ariel, and of course Caliban are being played as female. How do you perceive this as being different from the norm, and how much of a statement is it making in the light of the current #metoo movement?

I was concerned about this decision at the beginning, I didn’t know how it was going to match the plot, but after hearing it from Stephen, it made sense: Ariel and Caliban considered as androgynous creatures, can be played by male or female. Additionally, Prospero’s rage is also easily relatable for women. 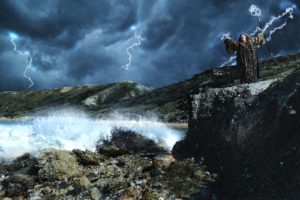 A “Prospera” wouldn’t have been possible 400 years ago because women couldn’t feel the anger and resentment portrayed in The Tempest. It could only be felt by men, and if women felt it, they certainly wouldn’t dare to show it.

I don’t believe it is about being part of the #metoo movement. It is not about choosing female actresses to be different from the norm, but about asking questions and not taking anything for granted no matter how many times it has been done or for how many centuries. It is about experimenting with the idea that The Tempest’s carousel of emotions: loss, revenge, love, forgiveness, are not to be gendered.

What inspired you to get involved in theatre?

It is a cheesy and cliched story, but only because it is true: I was very shy and reserved when we were asked to do a school production at 14 years old. It was a complete fiasco, but suddenly, I had a voice. For over 10 years, the theatre has been my space to experiment and play, and the language I use to immerse myself in the communities I wish to be a part of. Theatre it is such a powerful tool to connect humans, it never ceases to amaze me.

Staying in the car before entering the house after a long day. I get to do what I love: I get to teach Drama to kids, I get to work as an actress, I get to train with my friends. So, I take my time to let that sink in; and then I go in and meet my boyfriend for some pizza and Netflix. I’m so incredibly lucky.

MADC presents THE TEMPEST by William Shakespeare at San Anton Gardens, Attard, on 29, 30 June and 2, 3, 4, 5, 6, 7, 8 July 2019, with all shows starting at 8.30pm. Opening night tickets at just Euro15! This production is suitable for general audiences and children aged six and over. Booking is now open, with tickets and more information available at www.madc.com.mt.

A week-long getaway with just one piece of hand luggage? It’s possible!