Rehearsals for Masquerade Malta’s production of Lucy Burke’s Glitter Punch  are under way. indulge.com.mt caught up with one of the play’s two stars – promising young actor,  Gianni Selvaggi

Firstly – a very simple question – who is Gianni Selvaggi? 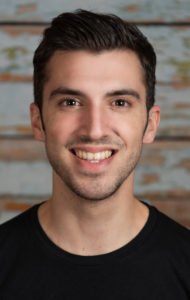 Actually, a pretty tough question. In short, I’m an Italian-Maltese guy, passionate about storytelling and creating things that means something to someone; be it through music, theatre or writing.

When and why did you fall in love with the Stage

My love for the stage began in music. I think it was in 1998 when I realised that I wanted to perform; I was very young and my parents took me to watch my uncle Patrick perform one of his original songs in a VOICES concert at MCC. I loved the concert because it was something I related to, as I was already in my school choir. So hearing a bunch of roaring voices in front of me was magical. When it was time for my uncle to sing his song, everything and everyone fell silent and just listened to his story. From then on I knew that I wanted to make people feel the joy I felt at that moment.

Glitter Punch is described as a gritty, coming-of-age drama about two people who embark on a journey of forbidden love that will change their lives forever. It is a storyline that is often at the core of plays – what is different about this one?

I guess it’s all down to moral dimensions of love. Glitter Punch could simply be seen as two people who don’t fit in and find comfort in each other. But this kind of love can have consequences.

What do you think audiences will take away from the play?

It’s a play that will certainly leave some audience members questioning their beliefs about where they stand on the characters’ circumstances.

What is your most memorable moment from rehearsals so far?

To be quite honest, every rehearsal has had its memorable moment. We continue repeating an inside joke we have, based on a memory of a previous collaboration we did together. It’s a perfect moment to break into laughter.

Can’t imagine myself doing anything that’s not in the arts. I’m already working in the entertainment industry outside of the arts, so I guess, if I had to change career, I’d continue pursuing video-journalism, photography or design.

And finally, what is your favourite indulgence?
Staying in on a rainy day with a cup of tea, a movie or two and some good company.

Glitter Punch by Lucy Burke is produced by Masquerade Malta and directed by Petra Sant. It stars Gianni Selvaggi and Monique Dimech Genuis. It will run for  three performances only on 26 April at 8pm, 27 April at 8pm, and 28 April at 6pm, at the Blue Box Theatre, M Space, Oscar Zammit Street, Msida. This production is suitable for audiences aged 16 and over. All tickets at €13 and booking is from www.masquerademalta.com or by calling the Ticket Hotline on 7979 3737.

Tony Award Winning Matilda The Musical to be Staged in Malta

Glitter Punch to be Staged at Blue Box