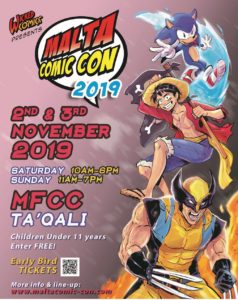 Wicked Comics are proud to present this year’s Malta Comic Con poster. Designed by comic artist Luisa Russo, the poster features a colourful and vibrant cast of pop culture characters from the gaming, comic and anime sphere. Wicked Comics organizers, Mark Ellul and Juan Mario Farrugia, who edited the final poster, remarked that this year’s poster will, “surely resonate with our audience”. They described it as, “enticing, entertaining and exciting… definitely one of our best posters”.

Every year, Malta Comic Con boasts an array of talents from around the world and this year is no exception. The first wave of guests for this year’s convention consists of poster artist Luisa Russo (Italy), Al Ewing (UK), Dan Cornwell (UK), Janine van Moosel (Scotland) and Leonidas (Steve) Stivaktis (Greece).

Luisa began her career with the Italian publisher Star Comics (Jonathan Steele, 2008-2010). Her first comic book was released in France in 2013: “Envols”, for Éditions du Long Bec. The second volume of the series was released in 2015. She is currently drawing a 5 comic books series: “Atlantide: Terre Engolutie” for the French publisher Clair de Lune. She is also the artist of three covers for a “Frozen” mini-series published by Dark Horse Comics, in collaboration with Arancia Studio.
MCC Profile – Luisa Rosso

Also joining is Al Ewing, who is best known for writing IMMORTAL HULK, LOKI: AGENT OF ASGARD, YOU ARE DEADPOOL and co-writing VALKYRIE, AVENGERS: NO SURRENDER and AVENGERS: NO ROAD HOME, among various other projects for Marvel comics. In the last years, he’s also worked on JUDGE DREDD and ZOMBO for the UK’s 2000AD comic, and co-written DOCTOR WHO: THE ELEVENTH DOCTOR for Titan Comics.

Dan is an artist for 2000AD, JUDGE DREDD and ROK OF THE REDS. The big break came when JUDGE DREDD and STRONTIUM DOG creator John Wagner saw his art in 2000AD fanzines Futurequake, Dogbreath & Zarjaz and asked if he would be interested in drawing his and Alan new story ROK OF THE REDS. Now he is a regular in 2000AD and Judge Dredd magazine while also working on the new second series of ROK titled ROK THE GOD.
MCC Profile – Dan Cornwell

Another new artist to visit Maltese shores is Janine van Moosel, a Scottish artist known for her work on City of Lost Souls, her Jessica Rabbit mashups and Portrait art. She has illustrated Children’s books and adult horror alike. Most recently she has been working as one of the Illustrators for Warhammer Fantasy and has her own comic series “Clown Fister” in production.
MCC profile- Janine van Moosel

Returning guest better known as Steve has been working in the field of illustration since 2008. He has illustrated several books for children and teachers, the pen and paper roleplaying game “The Small Folk” for Fate, and queer comics for Antivirus magazine. He’s mostly known for his comics Esmé, The Monsters in the Closet, and Skitsouxtra / Jellinkfish, as well as his Dungeons and Dragons fan and official designs. Currently, he’s working on concept art for tabletop roleplaying games, a graphic novel about growing up queer in 90’s Athens, and several science fantasy stories, both as comics and alternative media.
MCC profile – Steve

How to Make your Next Speech Funny or Funnier