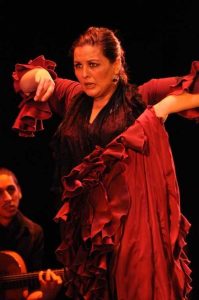 Teatru Manoel, in collaboration with Alegria and Jerez Puro, present “Jerez Puro Esencia”, an evening of pure flamenco dance, song and music on Saturday 25th and Sunday 26th May at 8pm.

The show features flamenco legend María del Mar Moreno who is also the director of the show. She is one of the true champions of traditional flamenco, and winner of the Best Artist at the Festival de Jerez 2013,  and Antonio Malena, one of the foremost flamenco singers and Artistic Director of the show.  The show also features singer David Carpio, guitarists,  Santiago Moreno and Malena hijo and palmas (hand clapping) Ale de Gitaneria.  They will be accompanied by Maria del Sol (Ingrid Sciberras) and Estrella La Maltesa (Estelle Bonello Sant) both from Alegria Academia and Dance Company.

Besides being a dancer, María del Mar Moreno is also a choreographer and teacher. For many years she was the principal dancer with a number of international dance companies, such as Manuel Morao y Gitanos de Jerez; guest dancer to accompany guitarist Paco Cepero and  has also partnered Antonio el Pipa. She currently owns her own dance company, which she has taken all over the world with productions such as ‘Momentitos de locura’, ‘Septiembre’ and ‘Dime que me quieres’. In recognition of this work she was awarded the Special Title of Cátedra de Flamencología from Jerez.

Antonio Malena does not understand anything other than singing.  With his flamenco roots spread between Jerez and Lebrija, the singer has enjoyed three decades of sharing his voice in various performances and festival both in Spain and Internationally.  He now forms part of the project ‘Jerez Puro’, a company co-shared with Maria del Mar Moreno.  They are both dedicated to teaching flamenco in cities like Jerez, Milan, Paris, Bordeaux and Malta. From an early childhood, he has shared many moments with great Flamenco artists and it is not a surprise that  Antonio Malena, at only nine years old, sang a “seguiriyas” with the young Moraíto in the legendary series of TVE, ‘Ritual and geography of song ‘.  From that point on, Malena is widely sought after around the Spanish circuit of clubs and festivals, sharing posters with great legends.

“Jerez Puro Esencia” is a unique show, created from the very essence of the best Flamenco of Jerez.  Song, dance and the traditional flamenco accompaniment (guitar and hand clapping) combined with the individual artistry of each of the brilliant artists gives them the opportunity of demonstrating the artistic heritage of the principal flamenco dynasties in Jerez.  With cante, guitar and dance “Jerez Puro Esencia” tells a universal story in the manner of the jerezanos; quite simply pure emotion.

Tickets are €25, €20 and €15 and can be bought from www.teatrumanoel.com.mt by email bookings@teatrumanoel.com.mt or telephone 2124 6389. There is 50% discount for students and senior citizens on selected seats and the culture card is accepted.

Monique Chambers asks: Would you or wouldn't you?

An Evening of Contemporary Music by Pianist Gabi Sultana