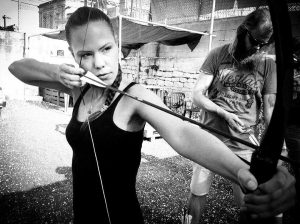 The first few weeks after discovering Tinder I pretty much booked all my evenings with a date. While my enthusiasm to take the dating world by storm was contagious, the late nights did not agree with me too much. Thus, I decided to take everyone’s unrequested advice and attempt to put some balance into my social life. I started looking for some interesting activities I could take part in.

The first place I came across was archery lessons, managed by a lovely gentleman named Armin of German origins, with a highly un-German sense of humour.

I didn’t really know what to expect, so I tagged along 3 other friends with me, whom were mostly persuaded by my annoying whining. By annoying whining I mean highly compelling arguments in favour of the activity, such as: “you suck if you don’t come with me”.

Little did they know they would soon regret giving in to my pleas, when realisation would hit them at the archery site that there was a very high probability that an arrow from yours truly could strike them at any time.

Anyhow, before we began Armin explained to us how we should proceed as to avoid any chance of injury.

We stood in a straight line about 2 meters away from one another, and proceeded to shoot at targets about 5-8 meters away from us. It was great fun, but what I found more interesting was the unique teaching technique that Armin used.

Armin teaches different types of bow-shooting, one of being intuitive archery. His technique reminded me of the teachings of Eckhart Tolle, voted the most spiritually influential person in the world by the Watkins review in 2011.

To our surprise, his simplified way of teaching ensured that after half an hour we were shooting pretty decently. To spice things up, Armin removed two of the targets and gave each remaining target a number. He then shouted one of the numbers and all four of us had to shoot at the right target. Anyone that knows me knows I’m not the most gracious loser. Of course, this made me the perfect target of everyone’s jokes, and the more frustrated I would get the more entertained they would all be.

It wasn’t quite how I had planned the afternoon to go, but once I managed to actually shoot where I aimed I let it all go. I highly recommend the classes to any ages. Armin is a fantastic teacher with a sharp sense of humour and the archery itself has an indescribable buzz.

For a course with a duration of 90 min. the prices for the Instinctive Archery or Combat Archery Courses, including equipment and instruction are:

Active Age Intergenerational Dialogue – An Exhibition from a Conversation across Generations